“Joshua, why do you insist on calling Luke that name?” his mother, Cherie, chided him. “If you keep putting him down all the time, he’ll develop an inferiority complex.”

“I’m just fooling around. See you later, Mom. I’ll be home by ten,” Joshua yelled as he ran out the door.

“Luke, come downstairs! It’s time for lunch.” Cherie stood at the bottom of the stairs waiting to see if her youngest son would need additional prodding.

Whenever Luke became interested in something, he tended to focus on it and block out everything else.

Cherie started to walk up the stairs.

“I’m coming, Mom.” Luke came out of his bedroom and quickly shut the door behind him.

“What project are you working on now?” she asked as he sat down at the kitchen table.

“I can’t tell you; it’s a secret.” He turned his attention to his peanut butter and jelly sandwich.

After Luke finished lunch, he returned to his room and shut the door.

I wonder what he’s working on now. Cherie sighed as she pruned the rose bushes in her garden. Luke is so different from Joshua and Brandon.

Cheri’s older sons played on softball teams during the summer. During the school year at Geneva High School, Joshua played varsity football and Brandon played basketball. In the fall Luke would be returning for his last year at Gregory Middle School.

“Nick, I’m a little worried about Luke,” Cherie told her husband that evening.

“Why? Just because he doesn’t seem interested in sports? I wasn’t exactly a jock when I was his age! In fact, I’m still not!”

“I know, but you’re a computer programmer, and when you were his age, you spent all of your time trying to write programs and invent a new computer language.”

“Are you calling me a nerd?” Nick grinned.

“Yes, I am, and that’s one of the many things I love about you.”

Nick put his arm around Cheri and gave her a hug. “Luke will be okay. He’s just trying to find where he fits. Not everyone knows what he’s good at by the time he’s thirteen years old. We need to let him explore a variety of interests. Eventually he’ll find one that he enjoys and he’ll do well in it.”

“I hope you’re right, Nick, because I don’t know where Luke fits.”

The next morning Luke got up at four o’clock and quietly left the house. His grandfather was waiting for him outside in his truck.

“Hey, Luke, do you have your throwing arm warmed up?”

“Thanks for helping me with my paper route, Luke. My arthritis gets really bad some mornings. It would be impossible for me to keep working my route without your help.”

“I’m glad I can help you, Grandpa,” Luke replied.

After trying to toss the papers on the doorstep of a couple of houses, Luke gave up and decided to just carry the papers and gently deposit them outside the doors.

“I have to admit, Luke,” his grandfather said after they completed their route. “You may not have a major leaguer’s throwing arm, but you’re a diligent worker.”

He dropped Luke off in front of his house, and Luke quietly unlocked the door and crept up the stairs to his bedroom. He shut the door and changed back into his pajamas.

“Mom, can I go over to Grandma’s house?” Luke asked after breakfast.

“Okay, honey,” Cherie replied as she placed the dishes in the dishwasher. “But remember to do whatever she tells you to do and don’t overstay your welcome.”

Luke ran upstairs and retrieved a package from his bedroom and then raced out the door. He ran the four blocks to his grandparents’ house, and found his grandmother in the front yard tending her flowers.

“I fixed it, Grandma, just like I told you I would,” Luke called to her.

“That’s wonderful, Luke,” she responded. “I knew you could do it. Now let’s go inside and take a look at it.”

Luke gently lifted his grandmother’s anniversary clock out of the paper sack and set it down on the dining room table.

“Well, it seems to be working just fine now,” his grandmother remarked. “How did you fix it?”

“I found some information about fixing clocks on the Internet. Then I took apart the clock and saw that it looked really dusty inside. So I borrowed my mom’s mascara brush, washed off all the mascara, and cleaned the insides of the clock really well. Then I put it all back together and it started working again.” Luke smiled at his accomplishment.

“I’m very proud of you, Luke! But I would suggest that you buy your mother a new mascara.”

“I already did, Grandma,” Luke responded.

His grandmother got her purse and took out a $20 bill. “I told you I would pay you if you fixed my clock. 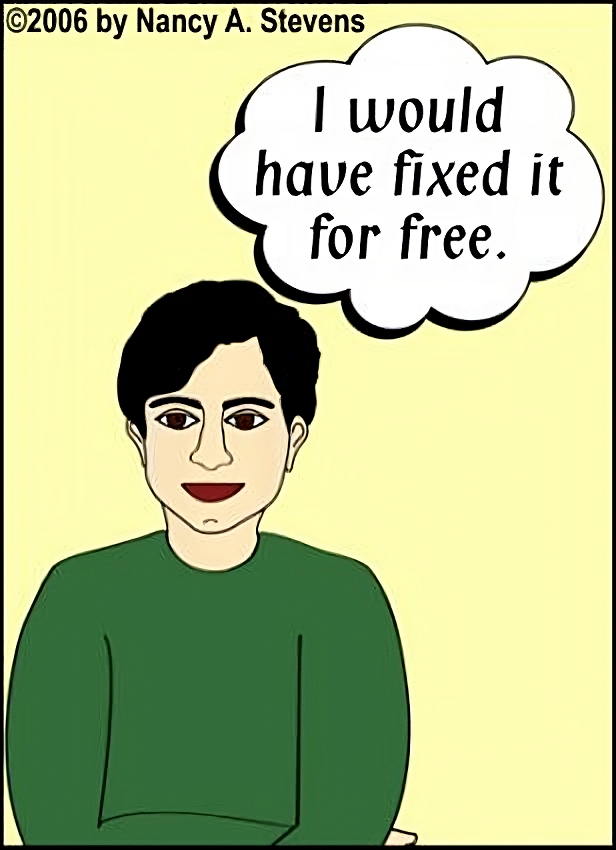 “Thanks a lot, Grandma!” Luke stared at the bill. “But I would have fixed it for you for free.”

“I met Mrs. Abramson in the deli yesterday, and she told me that you had carried all her groceries into her house the day before.”

“Yeah, I usually stop by her house on Wednesday afternoons to help her for a little while,” Luke said matter of factly.”

“Oh, and what else do you do?” his grandmother asked.

“On Thursday afternoons, I bring our old magazines to Mr. Maldonado, so he can read them. He’s trying to improve his English. On the way home, I visit Mrs. Rosario for a few minutes. She gets lonely since her husband died and her children moved away.”

“Why did you decide to do all these things?”

“I read in the Bible that everywhere Jesus went, He did good things to help people. I want to be just like Him–as best I can. So I asked God to show me ways to help people in the neighborhood. Opportunities just started opening up for me.”

Luke spent the day at his grandparents’ house, pulling weeds in the garden and getting things down off top shelves, so his grandmother wouldn’t have to climb up the stepladder to reach them.

“Uh-oh, it’s five o’clock. I lost track of the time. My mom’s not going to be very happy if I’m late for supper. I’ll stop by again tomorrow, Grandma,” Luke said as he raced out the door.

When Luke arrived home he ran upstairs and washed his hands.

Both his parents were sitting at the table talking when he walked into the dining room.

“Your grandmother called us to apologize for keeping you so long. Luke, why didn’t you tell us about all the things you’ve been doing for people?” his mother asked in amazement.

“Because Jesus said that when you do something good you shouldn’t announce it to everybody. He didn’t go around telling people about all the good things He did. So I decided that I wouldn’t either.”

“How long have you been helping people?” Nick asked.

“For a few months,” Luke replied. “I decided I didn’t want to wait until I grow up to be like Jesus.”

“I’m stunned,” Cherie told her husband that night after Luke had gone to bed. “I was so worried about him finding something that he would be good at. And all along he was busy finding and doing good things for other people.”