A six-lesson course to help people know that God cares about them and has a plan for their lives. Do you sometimes wonder what life is all about? What is the truth about God? And what happens after death? If so, these six lessons will be very helpful to you. Millions of people have asked the very same questions all throughout time. Many are lost in their search for truth, but others have had their questions answered. In this book, you will explore the answers to questions that you have, and want answers to.

1. What’s Happening to the World?
2. What’s The Truth About God?
3. What’s Life All About?
4. How Can You Meet Your Greatest Need?
5. What Happens After Death?
6. Does God Have A Plan For Your Life?

What’s Happening to the World?

In This Lesson You Will Study The Following:

How Can You Know the Truth?

You can learn many wonderful things about the world and its people through science, history, and observation. However, you cannot learn the answers to many of the great questions of life from these sources. They do not tell how life began, what its purpose is, and what the future holds.

Only the One who made the world can tell you how He did it and why. He tells us the truth about these things in His book, the Holy Bible. It is a book of instructions for living in this world.

The only way to learn the truth about the creation of humankind and the world is from the Holy Bible.

These lessons are based on the Holy Bible. They quote from it some of the many verses that answer your questions. Before each quotation is the reference: the name of the book, chapter, and verse where the words are found in the Holy Bible.

There are many different translations of the Holy Bible from the languages in which it was first written. It has been translated into several hundred languages. The words in these lessons are quoted from some of the modern English translations.

How Did The World Begin?

Did It Just Happen?

Do you ever ask yourself, “Where did the world come from? Did it just happen? Or did a great mind plan it and a great power make it?” When you see a bicycle, a car, or an airplane, you know that it could not have just happened. Someone planned it and made it so that it would operate according to fixed rules.

The World Was Made According To A Plan

Someone planned every detail of the universe. That someone is God

The world and everything in it functions according to fixed patterns that we call the laws of nature. The more science discovers about these
laws, the more sure we are that Someone planned every detail of the universe, made it, and keeps it functioning according to His plan. That Someone is God, the all-powerful and all-wise Creator. He is the Lord, or Ruler, of the Universe.

Memorize This
Genesis 1:1. “In the beginning God created the heavens and the earth.”
John 1:3. “Through him all things were made.”

God Made A Perfect World

God created the sun, moon, stars, and earth. He fixed their orbits so they would not crash into one another. He ordered the exact distance
of the earth from the sun—not too close, or everything would burn up; not too far away, or we would freeze. Ocean and land were in perfect
proportions, and the atmosphere was just right. Then God made the living things. Last of all, He created man and put him in a beautiful,
wonderful world.

Memorize This
Genesis 1:31. “God saw all that he had made, and it was very
good.”

Why God Made The World

God made the human family and the world for His own enjoyment.

God made the world for His own enjoyment. He created the human family to be His children that He would love and enjoy. He made the earth
for their home. God would enjoy the beauty and the orderliness of His universe, but most of all He would take pleasure in the love of His children.

Revelation 4:11. “‘You created all things, and by your will they were created.’”

God wanted His children to be like himself and to share in His work. So He gave Adam and Eve, the first man and woman, a nature like His own in many ways. God would teach them. With His help, humankind would rule over the earth.

Check Your Answers By Looking Over The Section You Just Studied

Correct Any That Are Wrong

What Went Wrong With The World?

Look around and you will see suffering, sorrow, quarrels, violence, war, hunger, and death. The world is not perfect now. What went wrong? This once-perfect world has been spoiled by an enemy of God and by man himself.

God wants to help us; Satan tries to destroy us.

God has an enemy called Satan or the devil. He was made by God, but he became proud and rebellious. Now Satan is against everything that God is for. For example, God is good, but Satan fights good with evil. God wants to help us, but Satan tries to destroy us. God wants to enjoy humans’ love and fellowship, but the devil tries to separate us from God. Satan tries to make us follow him instead of God.

Satan told Adam and Eve lies about God. He persuaded them to sin, that is, to disobey God. God had warned Adam that sin would bring death, because sin separates a person from God. Life comes from God, so separation from Him ends in death. Adam and Eve chose to believe Satan instead of God. They broke God’s rules and went their own way with tragic results for the world.

The Effects of Sin

Sin brought disease and death into the world.

Romans 5:12. “Just as sin entered the world through one man, and death through sin, and in this way death came to all men, because all sinned.”

Disease and death were brought into this world by sin.

Sin has broken the fellowship between God and humans. As long as people are rebellious, disobedient, and sinful, they cannot have fellowship with God. Instead of being servants of God, they are servants of sin.

By choosing to disobey God, we join Satan’s rebellion and accept his rule. The earth has become a battlefield between God and Satan. You must choose on which side to be.

Your Choice—God’s Way or Satan’s Way 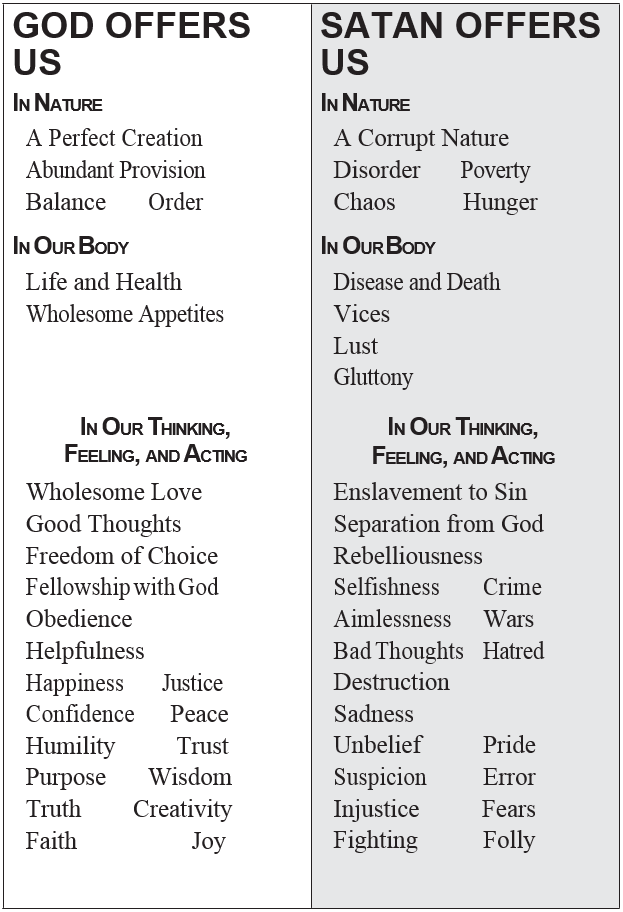 To Help You Learn

Put an X by everything you want in the chart and a zero (0) by those you do not want.

rather be on the side of God or Satan?

Is There Any Hope for the World?

God Still Cares for the World

God still loves us in spite of our sin. He has made a way to save us from sin, Satan, and eternal death. God still rules the universe and will one day bring the earth into obedience again.

The Son of God Took Our Punishment

Every person on earth has sinned and has been sentenced to die.

We had no way to save ourselves. God loved us so much that He sent His own Son, the Lord Jesus Christ, to take our punishment.

Nearly two thousand years ago Jesus came to earth and was supernaturally born of a virgin in the land of Palestine. He taught people the truth about God and His love. He did nothing wrong in life. He treated everyone with respect and kindness. Yet He was treated as a criminal, nailed to a cross, and put to death. He died for our sins.

God showed the world that Jesus was His Son by bringing Him back to life after three days. Forty days later, Jesus went back to heaven.

Friends of Jesus who saw Him after His resurrection and watched Him go up to heaven have told us about it in the Gospels.

Since Jesus has taken our punishment, those who accept Him as their Savior are freed from the power of Satan. When we turn away from our sins, God makes us His children and gives us His life. God urges us to believe in His Son and be saved from sin, but He will not force us to do it.

Our punishment for sin has been taken from us by the Lord Jesus Christ.

Romans 5.17. “For if, by the trespass of the one man, death reigned through that one man, how much more will those who receive God’s abundant provision of grace and of the gift of righteousness reign in life through the one man, Jesus Christ.”

John 3:16.   “For God so loved the world that he gave his one   and only Son, that whoever believes in him shall not perish but have eternal life.”

Romans 6:23.   “For the wages of sin is death, but the gift of God is eternal life in Christ Jesus our Lord.”

You Can Live in A Perfect World

One day Jesus is coming back to the world to free it from sin and make everything new. If you accept Him as your Savior now, you will live with Him in complete happiness then. Even now, your life will be better because Jesus will come to live in you so you can do what pleases God. You can begin to enjoy today the blessings that belong to the children of God.

To Help You Learn

Write your name in the blanks.

so much that He gave His only Son, so that

who believes in Him may not die but have eternal life.

If you want to accept Jesus as your Savior now, pray this prayer.

Thank You, God, for loving me and sending Your Son to die for my sins. I accept Jesus now as my Savior. All the rest of my life, I want to be on your side and not on Satan’s. Please make me the kind of person that You want me to be.

May God richly bless you!