“Ariel, I overheard one of the other servant girls talking about the queen,” Shiana remarked. “She said the queen is the bravest person in the whole kingdom. Is that true?”

“Yes, it is,” Ariel responded. “You came to the palace only recently, so you don’t know the story of her amazing bravery.”

“Would you please tell me?” Shiana asked.

“Five years ago Queen Esther was brought to the palace to be considered as a possible wife for King Xerxes.”

“She is very beautiful,” Shiana interrupted.

“Yes, she is beautiful, but not just on the outside. She is gentle, kind and lovely in every way.”

“One of the girls told me that the God she worships makes her such a wonderful person.” 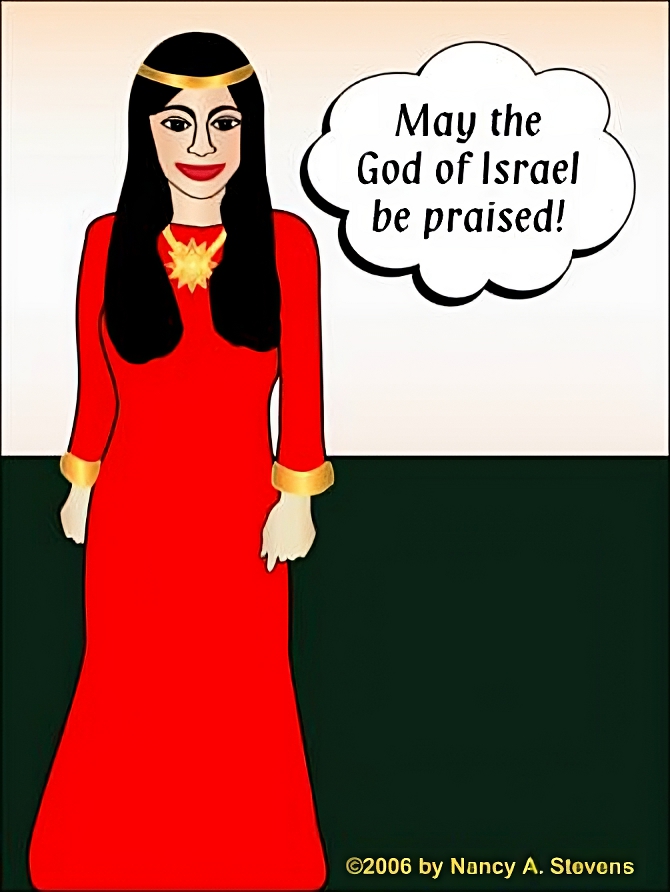 “Yes, but her faith in her God almost got her killed.”

“Like you, Shiana, our queen is an orphan. Mordecai, her cousin, raised her.”

“Yes, he is held in high esteem now, but that was not the case five years ago. Our queen and Mordecai are Jews. Their home is far away in Jerusalem. A previous king, King Nebuchadnezzar, took the Jews captive and brought them here to serve him,” Ariel explained.

“So the queen is a foreigner, like I am,” Shiana remarked.

“Yes, she is,” Ariel continued. “Five years ago, the most beautiful girls in the entire kingdom were brought to the palace. After receiving 12 months of beauty treatments, each girl was presented to the king. When the king saw Esther he set a royal crown on her head and made her the queen. Then he proclaimed a holiday throughout the kingdom and gave a great banquet in Queen Esther’s honor.”

“That must have been so exciting!” Shiana commented.

“Sometime later, the king gave a man named Haman a very high position and commanded all the royal officials to kneel down and pay honor to him. Haman felt so important! He really enjoyed having people bow down to him. He became very proud.

“One day, however, Haman noticed that Mordecai did not bow down to him.”

“Why did he disobey the king’s order?” Shiana asked.

“Mordecai’s God had commanded the Jews never to bow down to worship anyone on earth. The Jews worship Him alone because He is the one true God,” Ariel explained.

“So what happened?” Shiana asked.

“Haman became enraged. He decided to kill not only Mordecai, but all the Jews throughout the whole kingdom.”

“What a wicked man!” Shiana remarked.

“Haman told the king that the Jews did not obey the king’s laws and it would be in the king’s best interest to have them all destroyed. Haman even offered to put a large amount of money into the royal treasury to pay people to kill the Jews.”

“What did the king say?” Shiana asked.

“The king told Haman to keep his money and do whatever he pleased.”

“But Queen Esther is Jewish.” Shiana began to cry. “I don’t understand. Our queen is so sweet and kind. How could the king allow such a terrible thing?”

“The king did not know that Esther is Jewish. Mordecai had told her to keep that a secret. Dry your tears, Shiana,” Ariel said quietly. “Our queen is still here with us in the palace.”

“I want to hear the rest of the story,” Shiana responded.

“Haman sent the order throughout the kingdom to kill all the Jews–even women and little children–on a particular day. When Mordecai heard about it, he sent word to Queen Esther. He told her to go into the king’s presence to beg for mercy on behalf of her people.”

“But the queen can’t just barge into the king’s presence whenever she chooses,” Shiana interrupted. “The king has to send for her. That’s the law! If she approaches the king without being summoned, she can be put to death.”

“That’s why the queen and her maids fasted for three days and prayed to Esther’s God. Mordecai gathered all the Jews in the city and they also fasted. Esther told Mordecai, ‘I will go to the king, even though it is against the law. And if I perish, I perish.'”

“Our queen is so brave!” Shiana exclaimed. “I would have been terrified!”

“When the queen approached the king, he asked, ‘What is your request?’ She replied, ‘If it please the king, let the king and Haman come to the banquet I have prepared.’ So the king sent for Haman at once and they went to the banquet.”

Ariel continued, “After enjoying the food, the king asked again, ‘What is your request? I will give you up to half the kingdom.’ Esther replied, ‘Please come to the banquet that I will prepare for you and Haman tomorrow. Then I will answer the king’s question.’ The king agreed.

“That evening Haman went home and bragged to all his friends and relatives about how important and honored he was. ‘And that’s not all,’ he told them. ‘I’m the only person Queen Esther invited to accompany the king to the banquet she gave!’ 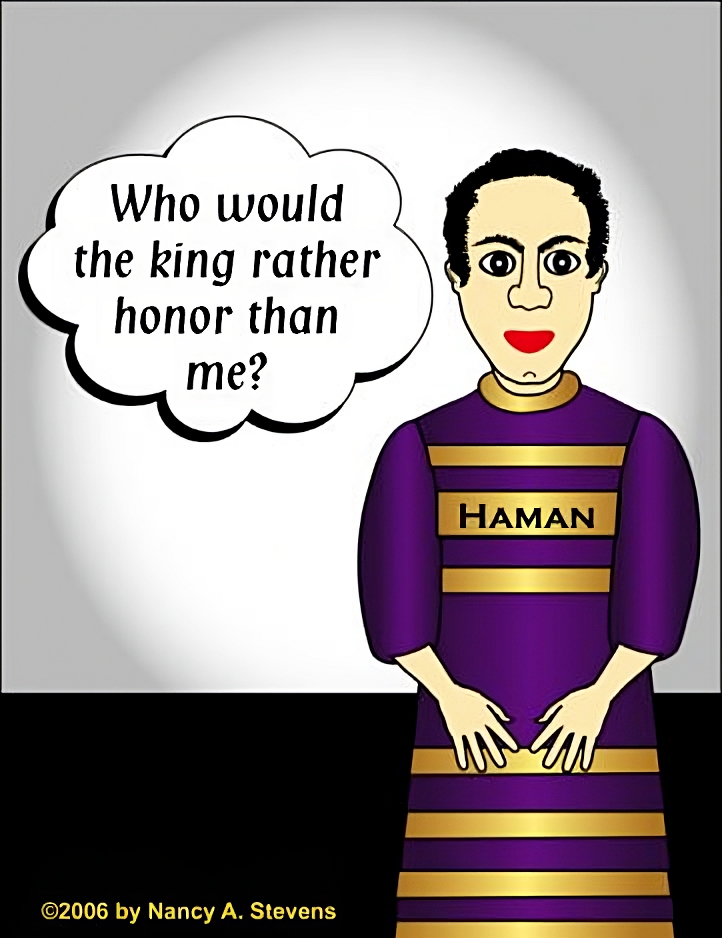 “Haman’s friends and relatives congratulated him. But Haman responded, ‘All this gives me no satisfaction as long as I see Mordecai not bowing down to me.’

“So Haman’s friends told him, ‘Why don’t you have a tall gallows built and ask the king to hang Mordecai on it tomorrow?’ That idea delighted Haman, so he had the gallows built.”

“But couldn’t the king see what a wicked man Haman was?” Shiana asked.

“No, because he didn’t know the truth,” Ariel replied. “He didn’t know Mordecai’s God. But that night the king was very restless and couldn’t sleep. He asked a servant to read the royal records to him.”

“Hearing a history book read to me would definitely put me to sleep,” Shiana commented.

“Sometime earlier two of the king’s officers had planned to kill the king, and Mordecai had reported them, saving the king’s life. However, the king realized that he had never rewarded Mordecai.

“Just then Haman entered, planning to ask the king about hanging Mordecai. The king asked him, ‘What should be done for the man the king wants to honor?’

“Of course, proud Haman immediately assumed the king wanted to honor him!”

“How arrogant and selfish!” Shiana interrupted.

“Haman suggested that the king give that man one of the king’s robes to wear and the king’s horse to ride. Then he should have one of the royal princes lead the man through the city streets, proclaiming, ‘This is what the king does for the man that he wants to honor!'”

“Wow! Haman was in for a big letdown, wasn’t he?” Shiana said with a laugh.

“Oh, yes! The king commanded Haman to do just as he had suggested for Mordecai!”

“He must have felt angry and humiliated!” Shiana commented.

“Yes, but he didn’t have time to think more about it because he was summoned to Queen Esther’s banquet. When the king asked the queen what her request was, she told him, ‘My people and I have been sold for destruction. Please spare my people and my life.’

“The king was shocked. ‘Who is the man who has dared to do such a terrible thing?’

“‘Haman is that horrible man,’ she responded.”

“What did Haman say?” Shiana asked. 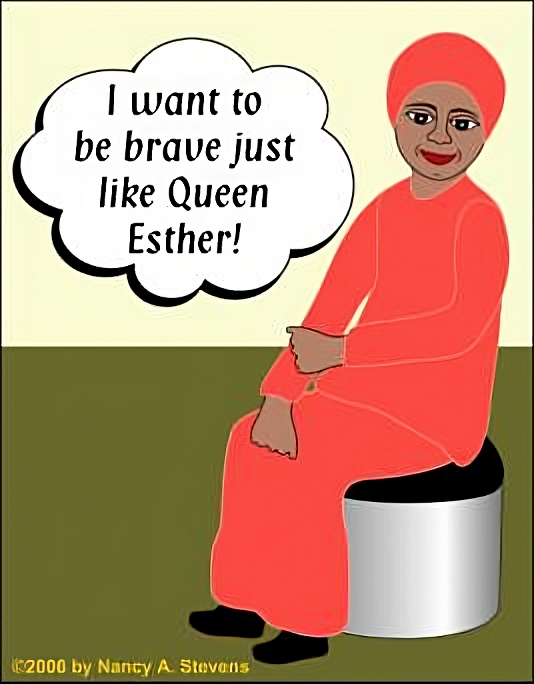 “Haman was terrified and begged the queen for his life. But the king ordered his servants to take Haman and hang him on the gallows that he had built for Mordecai.”

“I’m so glad the king finally learned the truth,” Shiana said with a sigh of relief.

“Queen Esther’s brave choice saved her people. The king gave her Haman’s property and promoted Mordecai to second in rank to the king. Unlike selfish Haman, Mordecai continues to use his position to work for the good of his people.”

“I want to be brave and kind just like Queen Esther,” Shiana responded. “And I want to know the God who helped her and Mordecai.”

“That decision, Shiana, will change your destiny.”