I had been calling the new group I had joined a “Bible study.”

I was into the third week before I learned the correct term was “Home Group.”

Ah. Not that anyone cared, really, but it underscored the fact that I was on unfamiliar ground.

After years of being in the same Christian circle, I was very clearly led by the Lord into another situation. Lately I have spent a lot of my time worshiping, studying, and praying with strangers. What revelations about myself I have received! I had no idea I was in such a rut. It was a comfortable rut–one where I knew who I was and clearly understood my role–but a rut nevertheless.

That comfortable, familiar identity is gone.

A part of me protests this strangeness and discomfort. At your age? a little voice whispers. Would God really take you someplace new when you had finally found a nice niche where you were? I think I know to beware arguments that begin, “Would God really . . . ?” He would. He did. He does.

Don’t think for a moment that it is ever too late in life, for God to upset your apple cart. 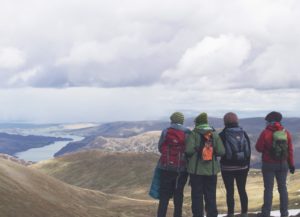 It comes down to nothing more or less than faith. Either we trust He knows what He is doing and where He is leading, or we don’t, and we stay with the comfortable and familiar, in the rut, which has been defined as a “grave with the ends knocked out.”

An English major, I have always loved poetry. I first read one of my favorite poems in high school English class. In William Cullen Bryant’s “To a Waterfowl,” the poet describes his thoughts upon seeing a single waterfowl flying at dusk. He was impressed by the purposefulness of the bird’s path. God, he says, teaches the creature the way to go, guiding its flight.

The waterfowl is “lone wandering, but not lost.”

Shortly before this change in my life, I was impressed when someone spoke of God calling us to the “next level.” It sounds wonderful, exciting, a spiritual advance to higher ground.

We read of Abraham’s call out of Ur to the land of Canaan, of Moses called to lead the Children of Israel out of Egypt, and our hearts are stirred. As with all heroic stories, living the reality is another matter. It’s much more comfortable to read about the exploits than to do them. It doesn’t feel particularly heroic to be called out of the familiar and routine; it’s more disturbing and disorienting than anything. We are so alone and uncertain of the way. It takes faith to believe that while we are indeed “lone wandering,” we are not lost.

In the new group, I found I was shy. After years of leading classes, teaching, and occasionally speaking before groups, I was tongue-tied, not knowing how to contribute to the discussion. I was hesitant to voice a prayer request during prayer time, uncertain how it would be received. These are small things, but requiring faith and boldness to overcome nonetheless.

By being obedient to God’s prompting, and beginning to share with these strangers, I find new doors opening, new relationships forming.

“By faith Abraham obeyed when he was called to go out to the place which he would receive as an inheritance. And he went out, not knowing where he was going” (Hebrews 11:8, NKJV).

I, too, go out, not knowing where I’m going. I suspect I will meet more strangers on the road ahead, but have determined to meet them with faith.

“He who, from zone to zone,
Guides through the boundless sky, thy certain flight,
In the long way that I must tread alone,
Will lead my steps aright.”
–To a Waterfowl