As I entered the church, somber organ music played. I quickly found my seat. My husband, Reverend John Miller, had been asked to be the minister in charge of the funeral service of Mrs. Lou Stokes, age 68. John and I were not personally acquainted with Grandma Lou, but we knew her son and daughter-in-law. I glanced around the auditorium. I noticed most of the people present wore black, coordinating appropriately with the dark mood that hung overhead like a cloud. Everyone blankly stared straight ahead at the empty lifeless shell that lay in the casket. 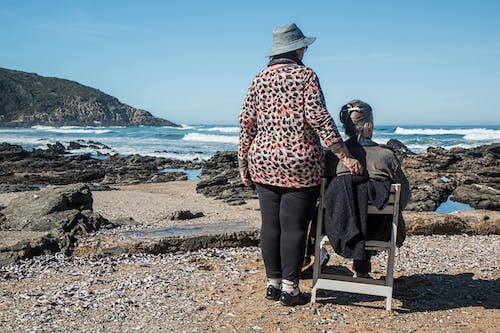 None of Grandma Lou’s family attended church except at Easter, Christmas, . . . and, of course, funerals. Yet when Grandma Lou passed away, her son promptly called the only pastor he knew, my husband, to preside over the funeral.

John met with Grandma Lou’s family the day before the funeral to make the final arrangements. As they sat and talked about Lou’s life, it was clear that she had quite a disdain for the church. Some thirty years ago or more, she had made a vow to never darken the door of a church ever again, and she had kept her promise. She had been quite verbal about her hatred for the things of God and had successfully turned the heart of her daughter toward atheism. In fact, Lou Stokes’ daughter continued to live out the legacy left by her mother even in her passing. She refused to attend the funeral of her mother because it was held in a church.

Grandma Lou’s son and daughter-in-law wanted desperately to validate Grandma Lou’s goodness. They spoke about how important her family was to her. They talked about her hobbies and interests. They created a collage of pictures and memories to be displayed at the funeral–a full-color reminder of a life lived in darkness.

Family and friends of Lou Stokes shed many tears. The three grandchildren clung to their parents, searching for comfort and reassurance. Several songs were played at the funeral service. The theme of each one was You’ll live on forever in our hearts, and you’ll always be as close as the stars in the sky, and the wind will whisper your name. Various family members honored Grandma Lou with words of endearment. One family member said, Grandma, wherever you are, I know you are watching and smiling.

If I hadn’t known better, I would have thought those were faith-filled words of a believing Christian family. But I knew better. They were words of a family grasping for hope. For without hope, our spirit falters and life becomes painfully void.

Within a few days another elderly lady we knew died, Esty Miller. In contrast, she had lived her entire life for God. She had come to know Christ as her personal Savior as a young girl and had never wandered from her commitment to Him. As family and friends filed into the church, there was an atmosphere of hope and peace. Esty had requested that two of her favorite hymns be sung at her passing. Each one spoke of a heavenly home and eternal joy in the presence of the Lord. The pastor who presided over the funeral service had known Esty Miller and her family well. He spoke of her long life of 98 years. Family members responded with knowing smiles as the minister shared stories of a life lived well. Two of her three children and one grandson became ministers.

Few tears were shed on behalf of Esty Miller on the day of her memorial celebration. Though she would be missed, those present were established in a solid truth, knowing that for Esty to be absent from this life meant that she was present with the Lord. Those who knew and loved Esty had hope in the fact that she lived on in heaven and they would be reunited with her again.

As the service ended, the strength and resolve of the family members was evident. They began to circulate among those in the crowd, welcoming and greeting long-time friends of Esty Miller. It truly was a celebration of her life on earth and now in heaven.

Ecclesiastes 3:11 NIV says, He has also set eternity in the hearts of men. Each of us yearns for more than what this life has to offer. Most people spend their lives searching for meaning and purpose. Some strive to leave behind a legacy or a memorial of their lives once they are gone. We innately want our lives to be remembered. That is because we are created in the image of God. We are eternal beings. Even a very long life lived to the full will not satisfy. But what unspeakable joy is ours when we embrace the resurrection life of Christ Jesus, knowing that we will live eternally with Him.