Where are You, God?

I was alone. Really alone. The dreaded divorce was final, and he was getting married again.

Where are You God? Didn’t You hear my prayers?

The divorce decree ended my hopes for my marriage being healed. I felt like a failure as a wife, as a woman, and as a Christian. My prayers were in tatters and my faith was in shreds.

I had believed with all my heart that God would heal my marriage. I claimed every promise I could find in the Bible during the three years preceding the divorce. All those promises suddenly seemed to mock me. All I had left was my six-year-old son. I was thirty and faced a future with seemingly no hope.

Fear and panic washed over me. What will become of us? I was at a turning point that would change my life forever. I didn’t want to live without the Lord, though I didn’t understand what had happened. I was angry at Him and afraid because I was angry. Even if I was a failure, I knew I needed to hang onto Him. Without Him, I had no hope. When everything caves in, He is the only One who can truly help.

During this dark time, I decided like Job, Though He slay me, I will hope in Him (Job 13:15, NASB). I promised to trust Him, no matter what. It was truly a step of faith for I had nothing to back it up but words in the Bible. 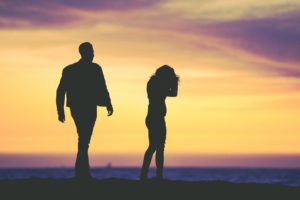 God was so faithful to me during that time. It didn’t happen overnight and the hurts took many years to heal, but He provided the companionship I longed for. God healed the deep scars of my life. He led me to safety. He taught me to talk to Him and pour out the pain, grief, and anger I felt.

I was without hope in my own strength. But in those desperate and lonely hours, He heard my crying and strengthened my faith. I discovered that though my life was filled with pain and unanswered questions, His way was best and still is. Almost thirty years later, I have a full and happy life. There have been many trials in the ensuing years, but each one has strengthened my faith as I talked to Him about it and sought His will for my life.

He knows the secrets of my heart and my worst self, yet He loves me with an endless love. I am so glad I decided to trust Him. It isn’t always easy, but I have no regrets because He is totally trustworthy. He has taken each broken part of me as I gave it to Him, redeemed it, and gave me the ability to trust again.