My body moved toward the kitchen, but my mind seemed to be in a dream. I stopped and looked in the hall mirror. The image I saw told me what was wrong. I was having a stroke!

This Can’t Be Happening!

Oh no, Lord! Please make this go away. It just can’t be a stroke!

The memory of my father’s debilitating strokes made this the one health issue I prayed would never happen to me.

After crying out to the Lord, I decided to ignore the obvious. By the time I ate breakfast, showered, and dressed, I would be okay. 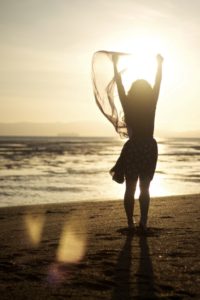 I went to the stove, got the oatmeal box out of the cupboard but couldn’t remember how to get the oatmeal into the pot. Finally, it came to me to use a measuring cup. After dressing, I started my devotional time and began to pray out loud, but my words were garbled. I could no longer ignore what was happening. I went to the phone and called a doctor, and the Lord enabled me to speak clearly enough that he knew what was wrong. He told me to go to the hospital immediately. I called my son and managed to tell him I was having a stroke and needed to get to the hospital. He dropped everything he was doing, rushed over to my home, and I was soon in the emergency room.

After an MRI of my brain, the doctor told me that the clot should have gone into the large portion of the brain; where it would have caused considerable damage. Instead, it turned into a smaller area causing minimal effects; garbled speech and some confusion.

Shortly before the stroke, I had found out that I had an irregular heartbeat and a leaky heart valve, which increased my chance of having a stroke. However, my doctor felt my risk was small because I didn’t have any of the risk factors except my age, and she felt that blood thinners were probably not necessary. Then two months later I had the stroke.

My speech improved some during the first day of my hospital stay but to my horror, on the second morning when I went to the mirror to fix my hair, I saw that my mouth was drawn to one side again and my speech was garbled. I was sure I was having another stroke. The doctor soon came to my room and explained that symptoms from a stroke can reappear until the blood clot is dissolved. They had put me on blood thinners when I entered the hospital, and he said that when the medication reached a therapeutic level, the clot would dissolve.

I could have died or have been disabled

Scott visited me in the hospital every day. He was the only one who could understand my babblings and encouraged me to keep trying. The nurse said that the more I tried to speak, and even read out loud, the faster my brain would reconnect the receptors. So, if I wasn’t trying to talk with Scott, I was reading my Bible out loud or quoting memory verses. My speech gradually improved, but the slurring or stuttering continued for awhile. There are still times when I can’t pronounce words correctly or there’s a slight slurring. The nurse said that when I get overly tired or stressed, I might notice a problem with my speech.

During my stay in the hospital, I saw Scott struggle with the reality that I could have died or have been disabled.

Looking Back I Have Learned to Trust

I look back over these months and can see that his faith and trust in the Lord has grown, which is an answer to my prayers.

He calls me every day to check on me. I hate to see him having to take on that responsibility, but I know the Lord will bless him for it. I believe the Lord is also using my stroke to work in the lives of my other two children, who have turned away from Him.

Even though the stroke was a frightening experience, and I don’t know what the future holds because of this illness, I know God is in control. He has allowed me to experience my greatest health fear.

I know He has a plan to bring good out of it.

My trust in the Lord continues to grow as I face each day, and I’m thankful that He has reminded me of how precious our moments are. The time that the Lord is allowing me to live must be more focused on what He wants me to do. Putting things off until it’s more convenient is no longer an option.

Yes, God has a reason for allowing these events to happen. It is always to strengthen our faith and trust in Him, but can also touch the hearts of our children and others.